Massachusetts Breast Cancer Coalition (MBCC) is calling on residents across the Commonwealth to lend their support to legislation that would enforce the disclosure of potentially toxic chemicals within children’s products in Massachusetts. The original bill, S.207, that MBCC and its supporters provided testimony for was amended by the Committee on Consumer Protection and Professional Licensure; this bill is the redrafted version and it has been referred to the Senate Ways and Means Committee.

MBCC continues to encourage supporters to contact committee chairs, Senator Rodrigues (Michael.Rodrigues@masenate.gov) and Senator Friedman (Cindy.Friedman@masenate.gov) to express support for this S.2676 and to request that the bill be reported favorably from the Committee.

I write today in support of S.2676 An Act Relative to Toxic-Free Kids.

I feel strongly that it is of the utmost importance to do all that we can to protect the health of our children. This bill is a step in the right direction.

I respectfully request that S.2676 be reported favorably by the committee so that it may continue through the legislative process.

Massachusetts Breast Cancer Coalition encourages MA residents to lend their support to H.2348 and S.1494, legislation that would ban PFAS (per- and polyfluoroalkyl substances) from food packaging in Massachusetts.

Currently, H.2348 and S.1494 are two pieces of pending legislation that were recently extended past their reporting deadline as to allow for a more thorough review by the Joint Committee on Public Health. Moreover, the Committee seems to be waiting for guidance from the Senate PFAS Task Force; this extension would hopefully allow for the possibility of borrowed language from the food packaging bills or the combination of PFAS-related bills into a single bill.

S.1494 – An Act relative to chemicals in food packaging

MBCC continues to call on the Committee to move favorably on these two bills by their reporting date on December 31, 2022.

MBCC continues to encourage supporters to contact committee chairs, Senator Comerford (Jo.Comerford@masenate.gov) and Representative Decker (Marjorie.Decker@mahouse.gov) to express support for the two bills and to request that the bills be reported favorably from the Committee.

Many of the chemicals used in food packaging can leach into food and enter people’s bodies. A study by Silent Spring Institute revealed that people who ate more meals at home had significantly lower levels of PFAS in their bodies than those who consumed more fast food or ate out more often. The families that live in Massachusetts and our future generations should not have to risk PFAS exposure or exposure to any toxic chemical from our food packaging.
This becomes even more apparent when considering the potential risks: increased cholesterol levels, changes in liver enzymes, decreased vaccine response in children, increased risk of high blood pressure or pre-eclampsia in pregnant women, decreases in infant birth weights, and an increased risk of kidney or testicular cancer.
I kindly ask that you please do the right thing to help protect the residents of Massachusetts and our future generations by supporting this legislation.
Sincerely,”

2022 – Along with our campaign to eliminate PFAS in food packaging, MBCC is campaigning to remove toxic chemicals from children’s products.

2021 – We campaigned to eliminate PFAS in food packaging in Massachusetts.

2020 – We campaigned to eliminate PFAS in food packaging in Massachusetts.

2019 – We campaigned to reduce the levels of PFAS in drinking water. Massachusetts adopted MCLs for 6 PFAS at 20ppt; some of the most stringent regulations in the country

The Risks of PFAS 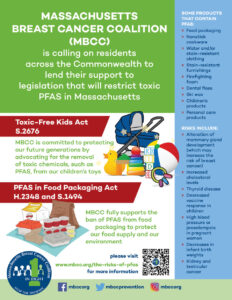 Per- and polyfluoroalkyl substances (PFASs) are a class of man-made chemicals used in the production of a wide range of consumer products such as stain-resistant carpets, non-stick pans, waterproof jackets, and grease-proof food packaging. These chemicals are extremely persistent, and some can linger in our bodies for many years. Nearly all Americans carry traces of these chemicals in their bodies.

With over 12,000 compounds, these toxic chemicals pose an enormous public health challenge. PFAS chemicals have been linked to a wide range of health effects including immune system toxicity, elevated cholesterol, delayed mammary gland development, effects on the thyroid and liver, and cancer. Scientists are concerned that exposure to these chemicals that alter mammary gland development may increase the risk of breast cancer later in life.

Many of the chemicals used in food packaging can leach into food and enter people’s bodies. A 2019 study by Silent Spring Institute revealed that people who ate more meals at home had significantly lower levels of PFAS in their bodies vs. those who consumed more fast food or ate out more often. This same study also showed that people who ate more microwave popcorn had higher PFAS in their blood. Chemicals in food packaging also raise health concerns when they are disposed of in landfills as they can enter the soil and groundwater, potentially contaminating drinking water supplies.