Massachusetts Breast Cancer Coalition (MBCC) will honor Emmy winner Charlotte Robinson with the MBCC Appreciation Award at the 21st annual Lesbians & Friends LGBTQ+ Dance: A Party for Prevention. The fundraising event to be held on October 20th at the Brookline-Boston Holiday Inn at 1200 Beacon Street in Brookline, MA, supports MBCC, the state’s leading breast cancer organization dedicated to preventing the environmental causes of breast cancer through community education, research advocacy, and changes to public policy. Honoree Charlotte Robinson is CEO and Host of OUTTAKE VOICES™, the online news network that for the last ten years has broadcasted to millions globally and has provided a voice for thousands of LGBTQ+ organizations and allies, including MBCC.
“Charlotte is a true humanitarian and an inspiration to all of us with her commitment in helping MBCC work towards our goal of breast cancer prevention,” says Cheryl Osimo, MBCC Executive Director. “We are very fortunate to have such tremendous support from Charlotte, demanding greater protection of all children’s future health in our effort to stop breast cancer before it starts.”
“Being recognized by MBCC means a lot to me. I was diagnosed with breast cancer 22 years ago and it changed the course of my life,” states Robinson. “MBCC is on target that prevention is key to the elimination of breast cancer and I support their effort for more environmental research and development. Since breast cancer does not run genetically in my family I truly believe that it may exist in the water we drink because before 1996 I never drank filtered or spring water. I have since then and I have been cancer free for the last 22 years. Thank you MBCC for your persistence and for this fabulous award!”
Charlotte Robinson began her career in Boston at WGBH-TV and then joined the staff of WCVB-TV where she broke the glass ceiling as the first woman to join IBEW. After leaving Boston, she acquired a position with ABC-NY and then accepted a staff position with CBS Inc. During her years at CBS, her credits included CBS News with Walter Cronkite and Dan Rather as well as post-production director for network news and daytime promos. Charlotte then joined CBS Sports where she earned an Emmy for her accomplishments on NFL-Today. While at CBS Sports she became an established music producer for NFL-Today and the U.S. Open. Since leaving CBS Inc., her corporate clients include: ABC News, Time Warner, Dupont, Sony, Condé Nast Publications as well as numerous music videos for MTV. Charlotte has served as a Blue Ribbon Panelist for the National Academy of Television Arts and Sciences News and Documentary and Daytime Emmy Awards. Her professional contribution to the process in choosing the best in News and Documentaries has been in Background News Analysis and best in Daytime in the Outstanding Talk Show category.
In addition, Charlotte has also acted as a Strategic Partner for the DNC, HRC, NARAL and Greenpeace. Her expertise has assisted these organizations in raising millions of dollars for lobbying in Washington D. C. In 2004, she produced and directed the acclaimed short film OUTTAKE™ addressing marriage equality that morphed into an online news network that broadcasts to over a million people globally. Since 2008 Charlotte hosts the weekly audio interview series OUTTAKE VOICES™, broadcasted on HuffPost, Google News, iTunes and Podbean addressing civil rights issues. Ms. Robinson also serves on the Board of Women in Film and Video-New England. 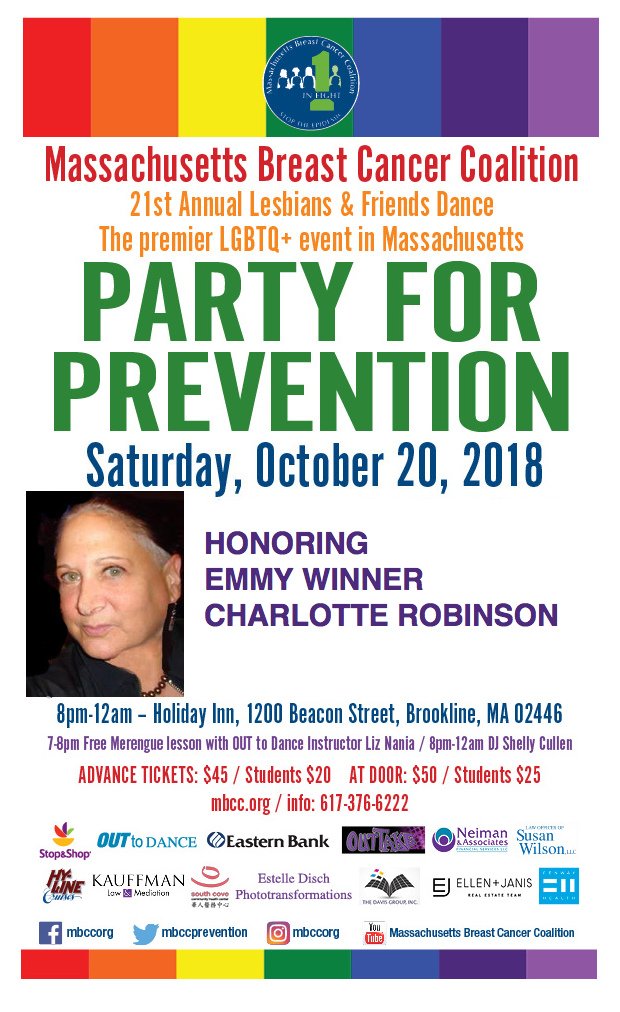